Independence. A strong word and even stronger characteristic.
I don’t think everybody realizes the things I go through everyday. Not even just me. Anybody with a disability.
How long does it take an able bodied person to put a shirt on? Five seconds? 10? Okay okay, let’s even say 30 if you’re a girl because of that hard-to-reach zipper in the back on that sexy peplum. Or if you’re a guy and wearing a button up…there a lot of buttons.
How long does it take me? Maybe… Three minutes let’s say. Could take 5 if it’s a tight shirt.
My point here is that a lot of people don’t realize how fortunate they are to be able to do a simple task such as picking a pencil off the ground. Or getting out of bed in the morning.
There are things I’m capable of and things I’m not. And I’m aware of most of them. And if it’s one word I hate… It’s dependence. Depending on other people is shitty. I appreciate every single stranger that has opened a door for me, or every one of my friends for coming to my rescue in a dire need of help.
But there’s two things:
1. There’s nothing I can do about it…and it just means I’ll never get lonely pretty much. There’s a plus!
2. Even though there are things I am absolutely not capable of, I ALWAYS think of the things that I CAN do. I’m not trying to brag but I love that there are so many things I am capable of doing myself. And i know I can do so much because I actually try and do it before saying “I need help.” Which more people need to start doing.

People with disabilities create this invisible line of limitation created by their own minds. For fucks sake people. The more you don’t do, you’ll end up losing the ability completely. An ability you might not even know you had! So do yourself a favor and if you can do it, someone else shouldn’t be. Point blank.
Especially if you have muscular dystrophy. You all know damn well the muscle you don’t use deteriorates and is gone forever. So don’t get lazy and let someone else do something because it’s faster if they do it. Unless you’re in a rush, you’re better off doing it yourself.

And I’m not here to lecture anybody. Just something I’ve noticed before. Also, I just hate seeing my friends get weaker and weaker every year.

I will not let my life be dependent on other people when it’s not needed. I create my own schedule with my abilities. It’s either that or I need to work around other peoples schedules, which is never fun.
This disease will not control my life. I’m controlling it. Every single day of my life. And I really hope others follow this motto too.

A quote that will forever be a part of my life: “Nobody has a disability. Everyone has ability. Let’s find it.” 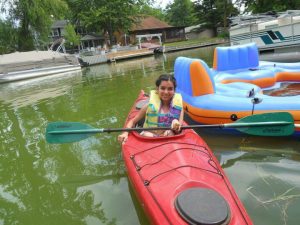